A journalist called Yvonne Volkart contacted me last year to ask if she could use some references to the ‘Dr Hairy in: Big.Data’ videos in an article she was preparing for the Austrian magazine springerin.

Springerin is ‘a quarterly magazine dedicated to the theory and critique of contemporary art and culture… Artists, gallerists, collectors, art pedagogues are served by springerin as well as readers from the field of the humanities and those generally interested in new media and popular culture.’

She’s just sent me a copy of the article, which appeared in the last edition of the magazine last year – she says she didn’t let me know earlier because she hoped it might  be made available online, but it hasn’t been. You can download a copy in .png format from http://edwardpicot.com/blog/wp-content/uploads/2015/03/volkart_springerin_bigdata.png .

Unfortunately it’s all in German, so it’s a struggle for me to translate, but I’ve managed to pick out the following – ‘wie die kartoffel mit dem schragen tomatenmund oder schlaue Grabber mit dem puppen- babyface und dem aufgeklebten backenbart’, which Babelfish renders as ‘like the potato with tomato mouth or clever Grabber with the puppet-babyface and the whiskers glued-on’. Brilliant!

An Austrian TV series is surely bound to follow.

and Dr Hairy pontificating about antibiotics:

Rhizome are hosting an exhibition entitled ‘Poetry as Practice’ – ‘ In this online exhibition, six poets approach internet language as a bodily, social, and material process. ‘

I don’t really know what that means, but the first entry is one of the nicer pieces of new media poetry I’ve seen for a while – ‘Better Homes & Gardens Revisited’ by Alex Turgeon – artfully simple-looking graphics combined with cleverly-animated texts. Well worth checking out. 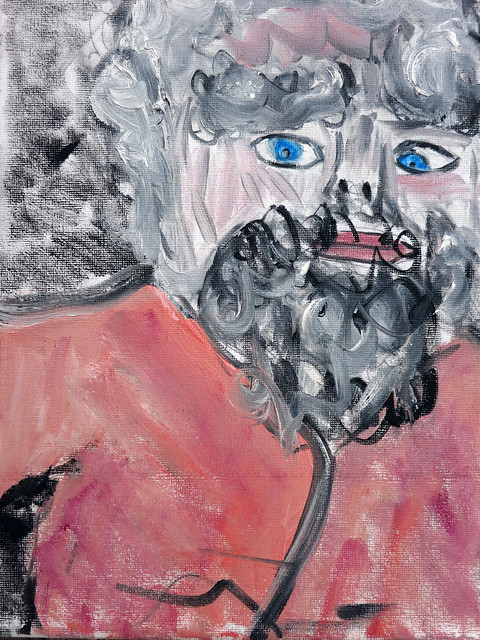 An impression of Dr Hairy by my friend Michael Szpakowski. It’s subtitled ‘Size Ten Rant’ and I think it captures something about Dr Hairy when he’s in full flow, telling it like it is, or like it seems to be if you’re ever so slightly bonkers. This is one of a set of images based on participants in the NetArtizens debate (mentioned in a previous post): you can see the full set at https://www.flickr.com/photos/szpako/sets/72157651122579216 .

Care of people with ENT oral and facial problems

Dr Hairy’s Casebook is an attempt to bring the RCGP’s GP Curriculum to life, by illustrating each chapter with one or more fictional but true-to-life case. To find out more, click here .

The Furtherfield organisation is currently running a project called NetArtizens, about what it means to be an artist and a citizen of the Net. There are lots of interesting posts about this on the NetBehaviour discussion-list, and one of the most striking contributions so far is a set of images by Paul Hertz called Isla Del Hierro Virtual . He describes them as

‘a series of glitched images of the Island of Hierro in the Canary Islands, captured form Google Street View. I lived on that island for a while in the 1970s, when the only way to get there was by boat four times a week. International communication was by a special phone in the Central Telefónica. It was really far away. Now it is so close by I can visit it by internet any time I want.’

For ‘glitched’ read ‘corrupted, either accidentally or deliberately’.

Weight change and risk of fracture in postmenopausal women

Is it a stroke?

How much is too much breast screening?

Type 2 diabetes and risk of cancer

Quantifying and monitoring overdiagnosis in cancer screening: a systematic review of methods